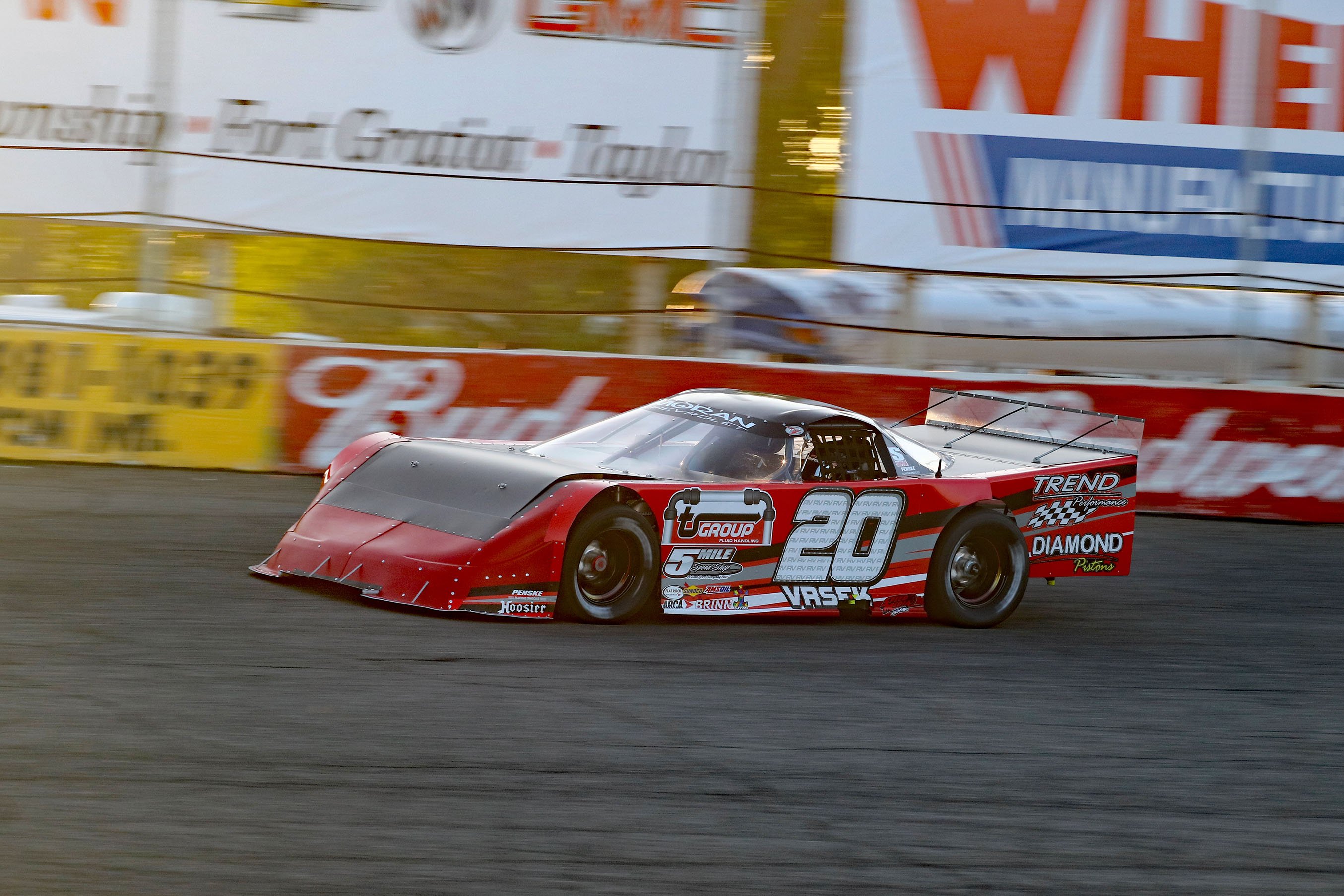 An airplane by pilot by day, a racer driver come weekends, Jeff Vrsek is leading laps and taking names.

“I was about four years old when I competed in my first race,” explains Jeff Vrsek. Hailing from Carleton, Michigan, Vrsek is an airline pilot by day, but it’s at the racetrack where he really gets to put his need for speed to good use. “My dad was a mechanical engineer for Ford Motor Company and he was involved in racing throughout his career, so I grew up around it.”

Jeff got his start in quarter midgets and quickly worked his way up the ranks. “I raced those for about ten years,” he recalls. “Then when I got into high school, sports and all the other stuff sort of got in the way!” He mothball’d the race car during college, but after graduating, his attention turned back to motorsport once again. “When I came back to racing, we started with a Modified car and ran that for a while. That sort of naturally progressed into Outlaw Super Late Model racing.”

While both Modified and Outlaw Super Late Model are Stock Car divisions, Vrsek notes that there’s some notable differences between the two cars. “The Modified cars have stock-style front clips and things like that, whereas with the Super Late Models everything is fabricated – the suspension’s totally fabricated. They’re not open wheel.”

The Outlaw Super Late Model rule set specifies chassis design and dimension, but Vrsek notes that teams have a significant degree of freedom when it comes to other aspects of their program in comparison to some of the other Super Late Model divisions. “There aren’t a lot of rules – we obviously have a rules package we need to work within, but there are very few limits when it comes to things like the powertrain and stuff like that.”

It’s a racing division that Vrsek had his eye on for quite some time. “The goal was always to get into an Outlaw car,” he says. “That’s what I grew up around, watching my old man wrench on these things, and there’s just such a big following in the mid-West here.”

But Jeff’s dad hasn’t been the only influential character in his racing career. “[Trend Performance founder] Bob Fox has been a huge part of our program, helping us out,” he says. “Bob started getting back into racing some years back and was running the Super Late Models while we were still running in Modified. We started hanging around with him, and it wasn’t long before we went and got an Outlaw car. We’re kind of piggybacking off of what Bob was doing – he’s a pretty smart guy! He really helped us step our program up.”

Underneath the skin of Vrsek’s Outlaw Super Late Model lurks a 358 cubic-inch small-block Chevy motor that’s designed around the Southern Super Series template. “The rulebook tells you what’s eligible in terms of cylinder heads, camshaft, minimum crank weight, etc. I’m also in the process of getting a Template Super Late Model car together right now, so I figured if I was going to have two engines, I wanted them to be kind of on the same platform just to keep things simple.”

Although there are some guidelines to adhere to, Vrsek says there’s room for teams to innovate. “For instance, I’m running a Dart block – there’s no rules about what block you need to run, it’s just a maximum cubic inch rule.” Diamond pistons, forged crank and rods, Trend pushrods, a spec Comp Cams camshaft, spec Brodix cylinder heads, and a spec Edelbrock intake are all part of Vrsek’s Outlaw combination, which he says is good for about 575 horsepower.

“A lot of teams, especially the ones who are racing at the bigger tracks, are usually running about 750 hp or more,” he says. “But we primarily stay on the short tracks with this Outlaw car. We used to run a big horsepower setup, but we had to de-tune the engines so much to make them drivable on the short tracks that it just didn’t make much sense. And running the engine at this power level helps with the durability.”

That strategy seems to be working. “I’ve been running Diamond and Trend stuff since we got back into racing, and we’ve never once had a failure with those components,” he says. “We have a compression rule we need to work around, so our engine builder profiled the heads we’re using and sent that to Diamond, and they built us a set of pistons based off of that. Zero issues.”

Vrsek says that his first two seasons running Outlaw were spent sorting out the typical fine-tuning of a new race program. But after they installed the Southern Super Series motor last year, the car really started to shine. “It absolutely came to life after that,” he says. “We led a ton of laps – tons of second and third place podium finishes. We just couldn’t ever quite close the deal for that top spot – we were running good, but we couldn’t get any checkered flags.”

That changed earlier this season. “We kept working hard,” he says. “At this year’s opener we ran fourth, and then at the second race of the season at Flat Rock Speedway, we won. It was my first Outlaw Super Late Model win, so that was really, really cool for me. We’ve got a lot of fast teams that run at these southeast Michigan events – every week there’s ten different cars that could go out there and realistically win that night. Some of these guys have been running these cars for 20 or 30 years. To go up against those guys and be able to win was huge for me.”

Vrsek says the plan is to build from here, running in the Outlaw series at weekly races while also prepping a new car for Template Super Late Model. “It’ll allow us to do some more traveling and run in national level events. We’ll kind of bounce around with the Outlaw car in the meantime. The goal is to keep getting those podiums and win more races! But if we can keep the nose on the car and stay up front, I’ll be a happy guy.”