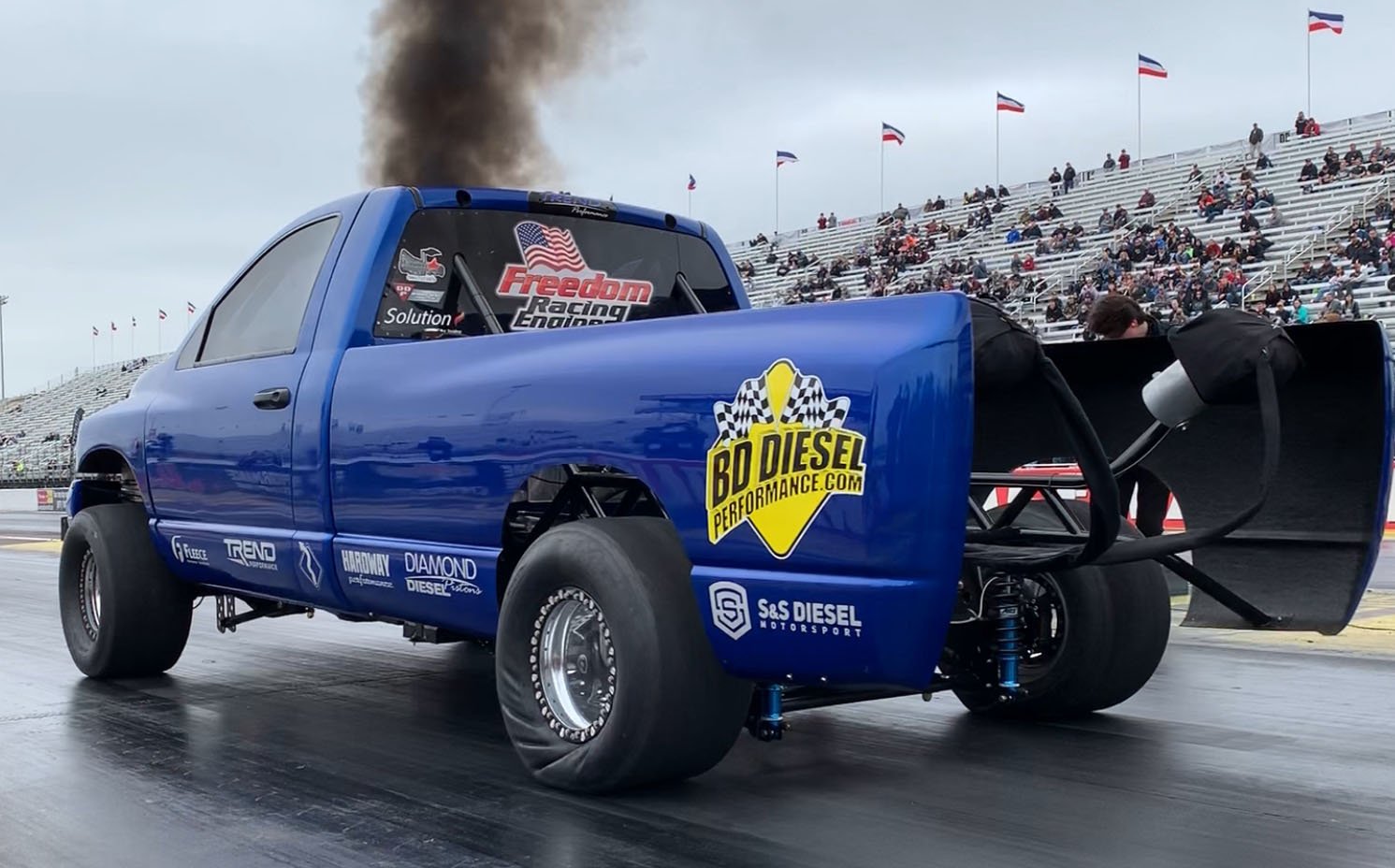 After a stint in professional motocross in early 2000s, Derek Rose turned his attention to the burgeoning diesel performance scene. In 2006 he founded the Casco Michigan-based tuning shop DNR Customs, initially focusing on fundamentals as the industry itself continued to evolve.

“A lot of bolt-on stuff,” he recalls. “But things just progressed from there, and the performance side started to grow a lot more, so we started turning the trucks up. We started off with our shop truck, and that eventually stemmed off into building a full race truck.”

Rose and the DNR Customs team got the wheels turning with a stock 2006 Dodge Ram 3500 Mega Cab, tuning the big machine up to nearly 900 horsepower. “It was still a daily driver, but we would go do some dirt drags and things like that,” he says. “It was never too serious, but it was to the point where it was making some decent power.”

That truck would prove to be a stepping stone in the journey, eventually leading Rose to purchase a wrecked 2006 Dodge Ram 2500 Regular Cab to purpose-build for competition. “That is the truck that we transformed from a total mess into what I’d consider one of the top trucks in the country for its configuration. It’s a bad ride.”

In recent years Rose has campaigned the truck in Outlaw Diesel Super Series, drag racing in the Pro and Pro Street classes, the latter specifying a 4,500-pound minimum weight with a recently-implemented 5.0-second index. “It’s challenging because the trucks are getting faster,” he tells us. “You need about 2,000 horsepower to get down to those ETs, and keeping together a 2,000 horsepower, four-wheel drive truck all weekend long is quite tough.”

To stay competitive, Rose and his team continue to find ways to extend the boundaries of the 2500’s capability. “It was pretty rough when I bought it – it was a salvage title that I bought at an auction with a bent frame. It was a mess,” he says. “So we started out by just basically resurrecting it. Initially it was street driven with about 1,200 horsepower, back around 2014. Since then we’ve just kept pushing it, figuring out what worked and what didn’t. About three years ago we ended up re-doing the roll cage and building a center-steer setup for it – one day me and my head technician, who is a monster truck guy, were looking at the gutted 2500 and he said I should sit in the center. I told him he was crazy, but we put a bucket in the center of the truck and I realized we could make it work. So we did it, and it’s been pretty cool. If nothing else, it definitely gets a lot of attention. People really like the design.”

More recently the truck was back-halved, replaced with a full tubular frame section that took about a thousand pounds of weight out of it. “We’re at about 5,000 pounds now,” Rose notes.

Motivating the Ram is a Freedom Racing-built 7.0-liter Cummins outfitted with a Force Inductions 102mm turbo when configured for drag racing, or a triple-turbo setup that adds a pair of Forced Inductions 91-100s to the mix for dyno competitions. Power is sent to all four corners through a BD Diesel 48RE gearbox. “On the drag strip, our best time to date is a 5.28 at 137 miles per hour – that puts us at right about 1,900 horsepower. And in the dyno configuration it makes 2503 horsepower at the wheels. And we did 3,780 pound-feet of torque – the most ever recorded on a chassis dyno.”

That record-setting dyno pull was performed at this year’s Ultimate Callout Challenge, a triathlon-style event that includes sled pulls, drag racing, and dyno pulls. Rose has been a top contender at UCC since its inception in 2016, taking second place in both 2017 and 2018. “This year we went in as one of the favorites, and we had high hopes,” he says.

“We felt like we had most well-tested truck and the best setup. We went out Friday and we laid down the fastest time at the drag strip during qualifying, but in the second round of eliminations we had a transmission failure on the line – we broke an intermediate shaft. So after that we were kind of down in the dumps going into the dyno competition, more than a hundred points behind. But we put everything on the table – I think we put like, 200 hundred points on second place, and it put us about a hundred points over the team that was in the lead. We put about 600 lb-ft on second place, and almost 300 horsepower.” That was more than enough to give Rose and his team the overall win at this year’s event.

Events like UCC are a torture test of mechanical fortitude, so Rose and his team have made every effort to develop a bulletproof setup. “We use custom length Trend pushrods, along with their DLC-coated tappets and trunnions,” he explains. “All of the Trend stuff has been rock solid – they kind of designed some of the products around our needs. A few years ago we were cracking stock bridges, and working with them we’ve developed the bridges into what they are today. Same thing with the trunnions for the rockers – the factory ones were galling under high RPM, and they developed a DLC-coated solution with some different oil passages which have been working great.”

With this year’s UCC competition now in the rear view, Rose says the team’s focus is turning back to the drag strip. “We recently outran our chassis certification, so we got disqualified,” he says. “We went too fast, essentially. So right now we’re just going to have some fun and do some local no prep races while we get our new cage figured out. The only other change we’re considering at this point is a swap to a Turbo 400 transmission. But other than that, the truck is working flawlessly now – there really isn’t much that needs to get changed. It’s finally doing what it’s supposed to do.”