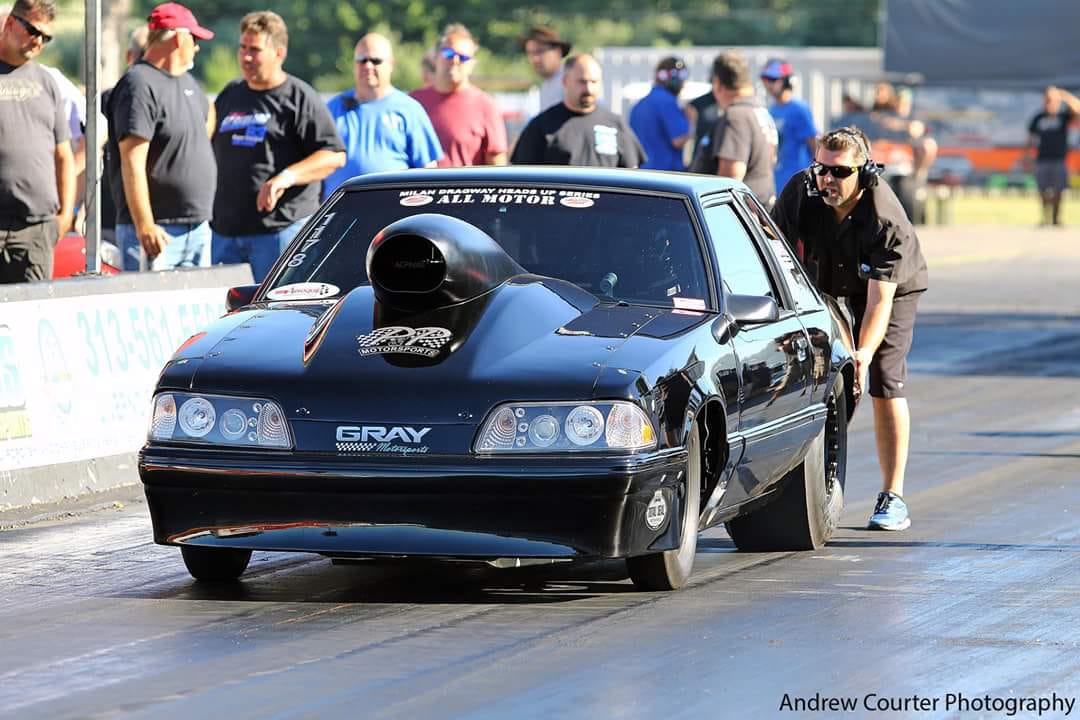 All-Motor Champions: P&P Motorsports Reminds Us That Consistency Is Key

Rusty Pancevski is winning races and taking names in the NA 10.5 world. We go under the hood of his championship-winning, 598ci Big-Block Chevy.

“I got my start as a teenager in a street car,” Rusty Pancevski says with a laugh. “Not too long after that I got hired at Dart, doing cylinder head porting. That got me more involved in motorsports and drag racing in general – bracket racing at the local tracks like Milan and Norwalk.”

Eventually the urge to change up the program struck, prompting Pancevski to try his hand at heads up racing. “Around 2003 we started to compete in the NMRA Hot Street class. We were originally running a 1988 Fox Mustang notchback with a nitrous-fed 306ci small-block before moving up to a 400 cubic-inch Ford small-block that was built in-house while I was at Dart.”

Although heads-up racing proved to be a better fit for Pancevski and the P&P Motorsports team, it wasn’t too long before they were ready to shake things up once again. “We decided to make some changes and race in the Liberty’s Gears All Motor class at Milan Dragway,” he explains. “And that’s when we ended up getting our ’92 Mustang notchback and building a 665ci big-block Chevy for it.”

The rule set of Liberty’s Gears All Motor class limits competitors to a single carburetor, a 10.5-inch tire, and a minimum weight that’s largely dictated by whether the car is motivated by a small-block or big-block. “The main limiting factor is the tire,” Pancevski tells us. “It’s not a lot of width to work with at this level of power.”

The initial setup of the ’92 wasn’t particularly exotic, he notes. “When we first started with it, we were running an 8.50-certified cage in the car, stock-style suspension, and a regular tubular K-member up front. But as time went on, we decided that if we were going to step up our game, we needed to step up the car itself, too."

Pancevski sent the Fox-body to KTS Race Cars, where a 7.50-certified cage was installed along with an Outlaw-style K-member, and the 8.8-inch rear was swapped in favor of a stout 9-inch unit. The team also ditched the stock suspension and went to a ladder bar setup, but that configuration didn’t last long. “We converted it over to a four-link in 2016, and that’s where we’re at today.”

Currently under the hood of the Mustang is a custom Dart 598 cubic-inch Chevy big block that’s fed by a Book Racing carburetor and paired up with Brodix 14-degree heads and a Comp Cams camshaft. Diamond pistons and Trend pushrods are part of the strategy as well. “Nothing but the best,” Pancevski says. “For our valvetrain, that’s what we need – it’s the best stability that we can have. Without Trend products, I don’t see how our valvetrain could be as sturdy as it is. We have had zero issues, and I can’t say the same for other products that we have used in the past.”

And that’s important when you’re competing with this much naturally aspirated horsepower. “It’s north of 1,400 horsepower and 1,000 pound-feet of torque on the engine dyno,” he says. “And that’s a direct result of the products that we use – without those, we wouldn’t be where we’re at now. The companies that are involved with our team have put us in the competitive position that we’re in today.”

Last year’s race season illustrates his point. “In 2018 we decided to focus on our hometown series because the setup was still really new,” Pancevski says. “With limited data and run time going into the season, the idea was to stick with familiar territory for now and expand next year.” Liberty’s Gears is a six-race series, but the first event in May was postponed, then canceled, due to two weekends of bad weather. “So the June race ended up being the “first” race of the season, and we qualified number two out of about a dozen cars,” he explains. “We ended up going to the final round at that race.”

Though the team would have to settle for a runner-up finish at that event, it set the tone for the season. “At the July race it basically the same thing,” says Rusty. “We ended up qualifying number three and finishing runner up. Suddenly we’re two races into a five-race season, and with two runner-up finishes, we were in the points lead.”

While the first two events were encouraging, Pancevski says he had a feeling the third race would be particularly interesting. “For some reason it just felt like it was going to be our day,” he explains. “It felt like the third time could be the charm.”

The team would qualify in the number three spot and take home the win. “Our driver and my brother-in-law, Tony Petrovski, just nailed it. We won it because Tony had a better reaction time, and that’s where the game was won.”

A strong early showing put P&P Motorsports in the points lead going into the September event, the last race of the season. But after qualifying in the number two spot, the team found themselves eliminated in the semi-finals. However, the points advantage they carried going into the race allowed them to hold on to take the title. “We ended up winning the championship by one point,” Pancevski says. “It was a tough battle, and it was all about our consistency. Being able to go rounds is what won our team a championship.”

The team plans to defend their title in Liberty’s Gears series in 2019 while also expanding into new territory. “Everybody’s goal is back-to-back titles, of course,” he notes. “But we’re also going to run in the NMCA series in the N/A 10.5 class. The rules are pretty similar to our local series – the main difference is that we have to run at a heavier weight.”

But outside of the additional ballast, Pancevski says the car won’t see too much in the way of setup tweaks. “The combination is pretty much going to stay the same. We’re always trying to find more power, but the car is so consistent at this point, we don’t really need to mess with it. Like anybody that has a love for the sport – and competition in general – we want to show up and win every race. At the same time, the main goal for us is to be able to show up, qualify for the race, and go rounds. Going rounds is what will lead to another championship.”